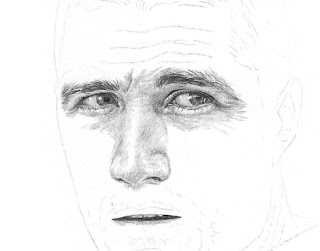 Ok, so its looks as though i'm not going to get started on the next animal drawing within the next couple of days, so I thought I would give you a sneak peak at a celebrity drawing I am working on. This drawing will include 6 of the main characters from the series 'Lost'.

It's going to be quite a few heads to draw (which is probably why i've been procrastinating on this one for so long). I'm only a couple of hours into it here, so the shading is still a little sketchy. This section is about 10 x 8cm - the finished drawing will be 40x30.

I've always enjoyed the celebrity work, and find it nice to switch between animals and people whenever I can. When finished, this will be available as a print from Kadinsky Art. Kadinsky publish around 30 of my celebrity prints, ranging from classics such as The Beatles, Muhammad Ali and Marlon Brando, to more recent celebs such as Russell Crowe, Jessica Simpson and David Beckham.

Nolon Stacey
Nolon Stacey is a self-taught pencil artist specialising in drawings of British wildlife, rural scenery, farm animals, dogs, and landscapes. Having never had any formal art training, Nolon acquired the methods he uses through years of trial and error. Each drawing can take anywhere from 50 to 100 hours to complete.